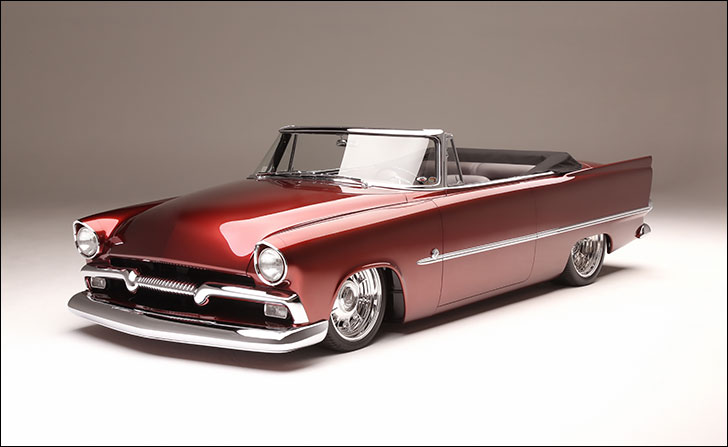 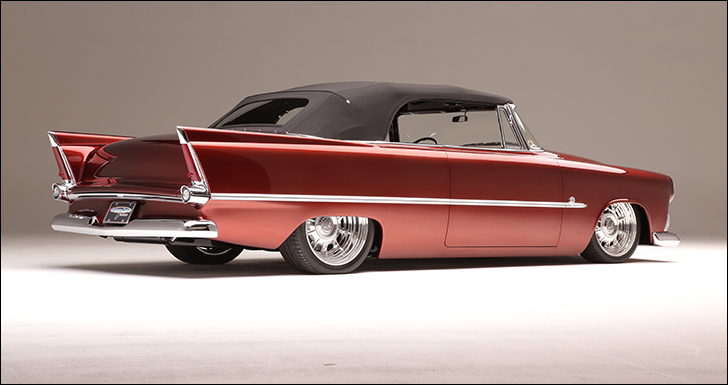 From a Jack to a King

Is this the ugliest car ever made?

We’ve looked this car over multiple times, and have yet to find an ugly spot. It’s true that owner Gil Losi has been quoted stating that the 1956 Belvedere convertible is “the ugliest car ever made,” but that was certainly before Steve Cook Creations had their way with one.

It’s really quite something that this car exists at all, if you combine the unattractive starting point with the bad taste growing in Gil’s mouth regarding show-car competitions. After landing oh-so-close to the Ridler on multiple occasions with cars that were more than worthy, Gil stated he was done building cars to reach for awards ruled by politics. We were pretty sure we hadn’t seen the last of Mr. Losi, but ya never know. The car bug bites deep and often. 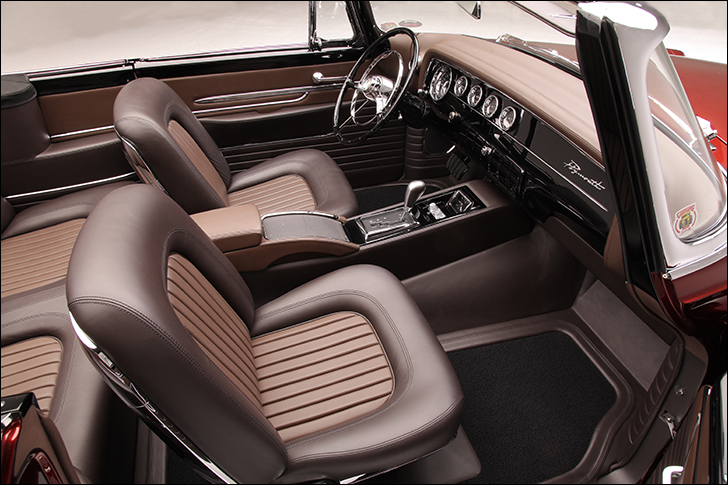 In stark contrast to his black ’61 bubbletop, Gil’s Plymouth is a beautiful red hue and notably topless, allowing full view of the interior. Peering at the cockpit, it’s tempting to jump over the door and take off, like a carefree teen in a ‘50s movie. Alas, with a SEMA booth to run, I had no time for broken legs, or whatever else my punishment would be; I refrained from recreating a movie scene and instead let my eyeballs soak in the chocolate-milk upholstery. Gabe’s Street Rod Custom Interiors got busy in the Plymouth, covering the T-Bird bucket seats, rear bench as well as the dash, door panels, and center console with two shades of brown cowhide. The dash was considerably reworked; symmetry was ditched in favor of sleek lines. The original layout was one large and two small gauges on the left, with two knobs and a large round grill on the right. Gil and Steve decided to rearrange things, which is when they called Dakota Digital. We whipped up a custom set of instruments based on our VHX-1022 package, yielding a large speedo with tach, and four satellite gauges. It looks somewhat like a 1970 Challenger dash, which should give the Mopar followers a warm feeling inside. 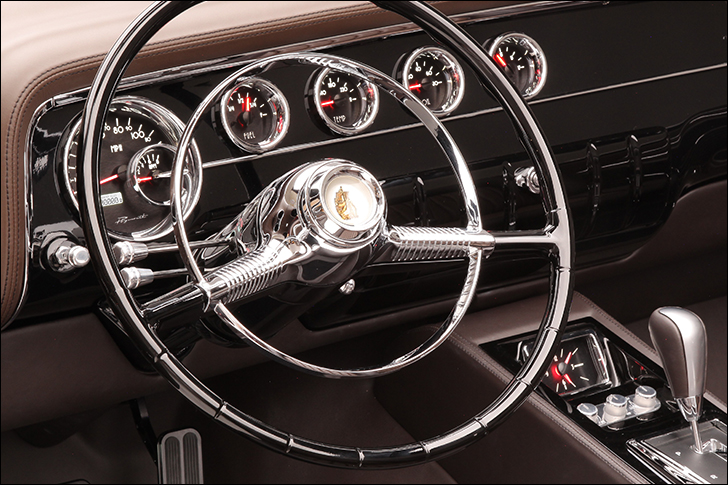 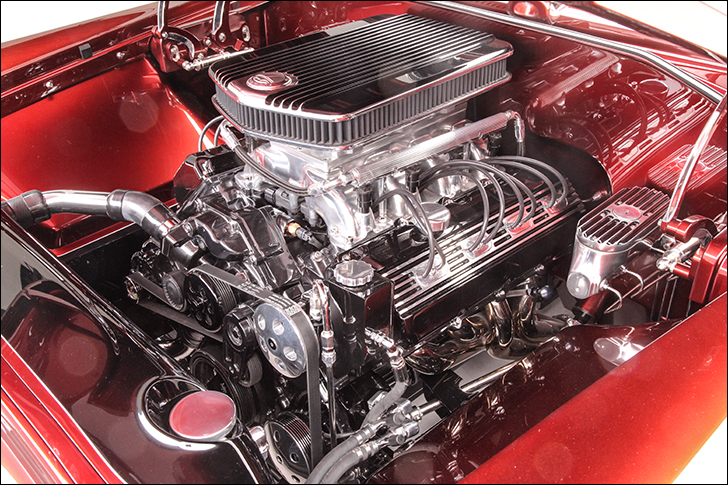 Also giving warm feelings is the 6.1L Hemi under the hood. The modern elephant was liberated from a 2006 Charger SRT-8. It seems possible that the donor vehicle is/was an internet sensation, sliding out of a parking lot and into stopped traffic. Whatever series of events brought it to Steve’s shop aside, the 425hp Hemi came with a 545RFE five-speed automatic. The duo was stuffed under the reworked bonnet, and topped with a beautiful EFI system that looks more vintage than it does modern. 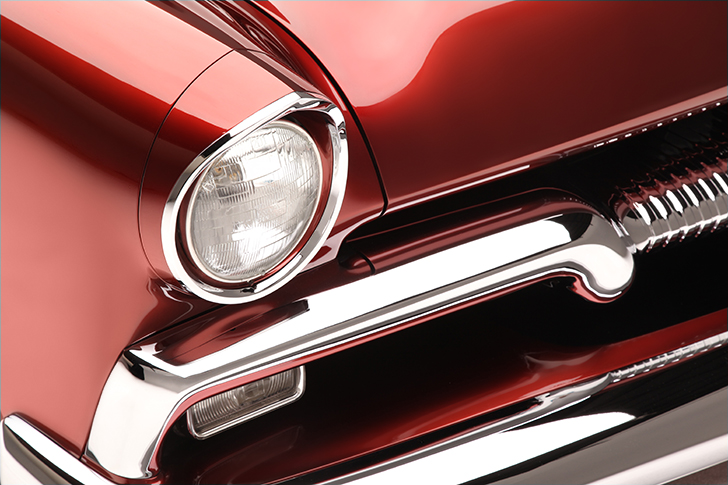 The body of the Belvedere received a lot of attention; I like to picture Steve Cook as a plastic surgeon, preparing to slice and dice his next patient. There would have been dotted lines all over the sheet metal, outlining a tuck here, lift there, a whole new one of those for sure. To start, a five-inch wedge was taken out of the profile, while a new hood was fabricated for a lower line. The car has a shape of action now, instead of the vague sensation that the front is taller than the rear. 1956 Chrysler 300 headlight rings lighten up the front, giving the nose a bright-eyed look. The side trim was simplified into a single, sensual spear, while the decklid was relieved of its brightwork. Both bumpers were also given a nip and tuck, losing the bolts as well as some width.

The original suspension was sent to that big restoration shop in the sky, and in its place is an Art Morrison Enterprises front end with RideTech inflatables at each corner. Discs from Baer Brakes are located just behind the quartet of Curtis Speed billet wheels, sized 18x8 and 20x10. The rollers were designed by Chip Foose, who has a knack for such work. The center caps even feature the Plymouth sailboat logo – that little ship on the back of Plymouth Voyagers! It’s much cooler in this setting. Detroit Speed wiggled a rack & pinion steering system under the car, proving their world isn’t just first-gen Camaros. 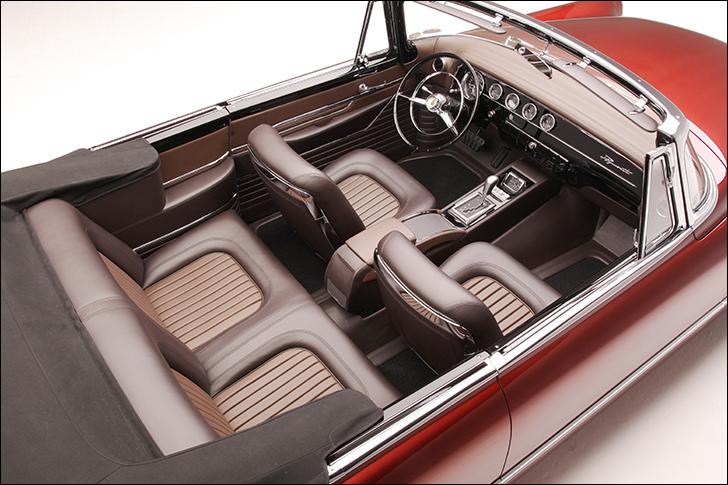 The way Gil and Steve incorporated modern pieces within the vintage Plymouth speaks volumes about the time and foresight that went into this car. The thoroughly modern shifter in the console looks right at home next to the 60 year old steering wheel; the Gen-III Hemi could be mistaken for a ‘60s engine at first glance. To date, the Losi’s have taken home several sought-after awards, including a Great 8 pick at the Detroit Autorama; which goes to show that you can find ‘it’ as soon as you stop looking. The Belvedere stands out in a sea of actually-ugly cars, ready to drive to the coast; top down, wind in your hair, just like that little sailboat badge suggests.