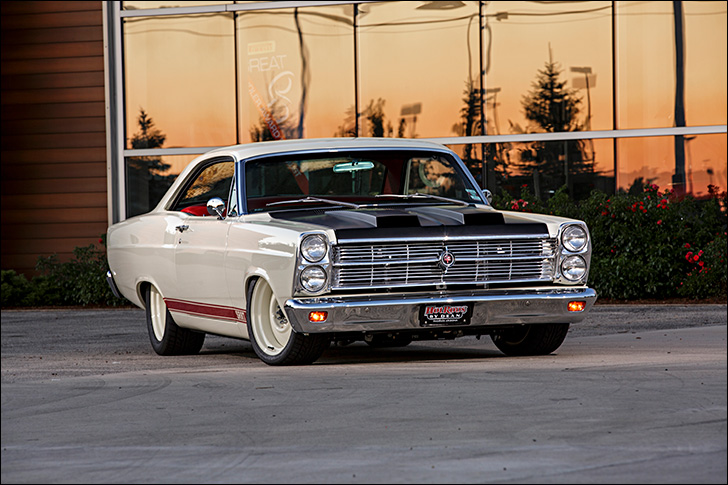 The Street Rodder Road Tour is for muscle cars, too

What’s in a name? Can the meaning of a name change? Organizations must be constantly on the move, working to stay in front of a paying audience, and as a result, some brands are bold enough to change to their name. For nearly 20 years, Ride Tech was known as Air Ride Technologies; very accurate, very descriptive, and very long. Once the company’s static- suspension offerings took off, they moved to shorten the name to a more succinct Ride Tech. Other times, the name remains the same, despite a shift in their offerings; since analog instruments took over the product line, Dakota Digital may seem out-of-sync, but we hang onto that name because it carries 30 years of history, and, even the analog systems are still digitally controlled, so it’s still accurate.  Street Rodder Magazine has been the authority on pre-’48 hot rods for nearly 45 years, but recently, their focus has broadened, and SRM now dabbles on both sides of 48th Street. Likewise, the NSRA, once staunch supporters of ’48 and earlier, has opened their gates to pre-’72 models.

In keeping with the times, the 2016 Road Tour car is a 1966 Ford Fairlane. It’s pretty far from a typical street rod, but it’s a primo example of the mid-size Ford and is broadening horizons with its 1960s styling and 21-st century technology. The Roadster Shop got first crack at the Ford, and custom built a full chassis using their REVO IFS system, complimented by a four link and 9-inch. Wilwood brakes are found at each corner, hidden from view by 18” Wheels Vintiques steelies. I’m still surprised (and pleased) that car builder Hot Rods by Dean didn’t snap on a set of caps; instead we get to see the lug nuts, all 40 of them. Yes 40; the wheels feature Ford and Chevy bolt patterns, so HRBD elected to fill the extra holes with more lug nuts for a unique, vintage race feel. 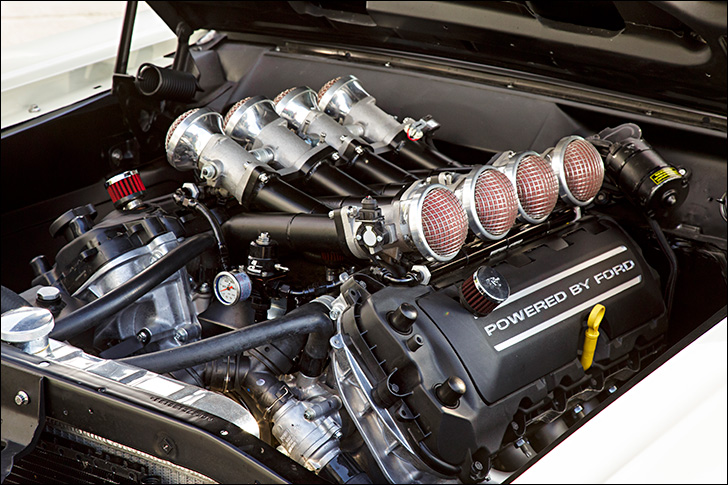 Under the scooped hood is a 2015 Ford Coyote 5.0L engine, fitted with a hand-built intake manifold that’s been topped by an Inglese Eight Stack throttle body system. It’s a trip to see all those throttle bodies lined up, especially once you figure out the whole works is run by a FAST XFI computer for modern EFI convenience. All of the unsightly sensors and such that come with a new engine have been hidden beneath the valley pan, causing the casual onlooker to mistake the Coyote for a vintage Cammer. A Hughes-built 4L80E was granted a 3,000 converter and makes moves via the Dynotech driveshaft. 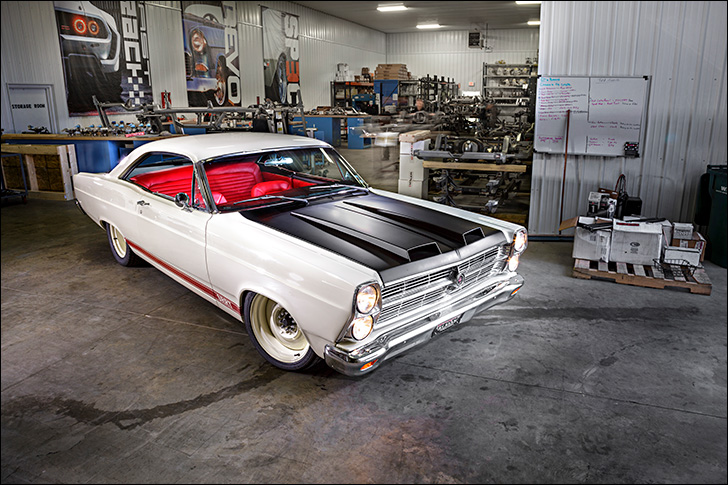 The Vanilla Shake paint is broken up only by the red stripe along the rockers, satin-black hood and trunk, and the better-than-new brightwork. Inside the cabin is very red; the Procar bucket seats, door panels, rear seats, carpet, and back lighting on the custom-faced VHX instrument system. VHX-66F-FAR is now a regular production part number, but this car got the first one. We matched the milkshake hue before adding the Street Rodder and HRBD logos to the face. The balance of the interior, including the shifter, aluminum pedals, Vintage Air vents and D-shaped steering wheel, flows together in perfect harmony, mixing several styles together without incident. 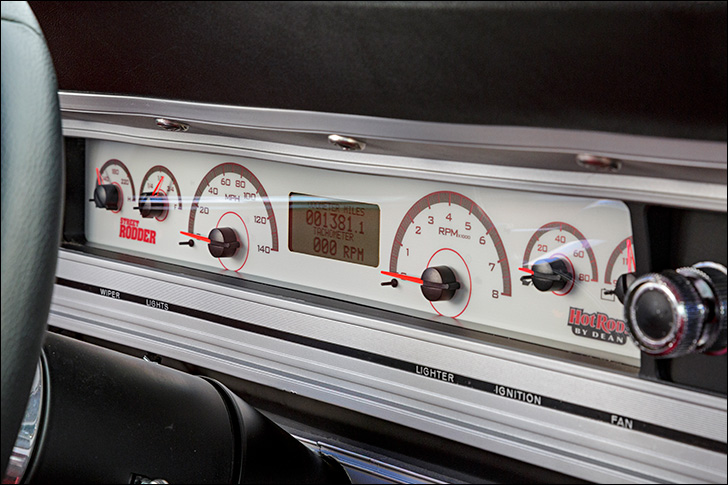 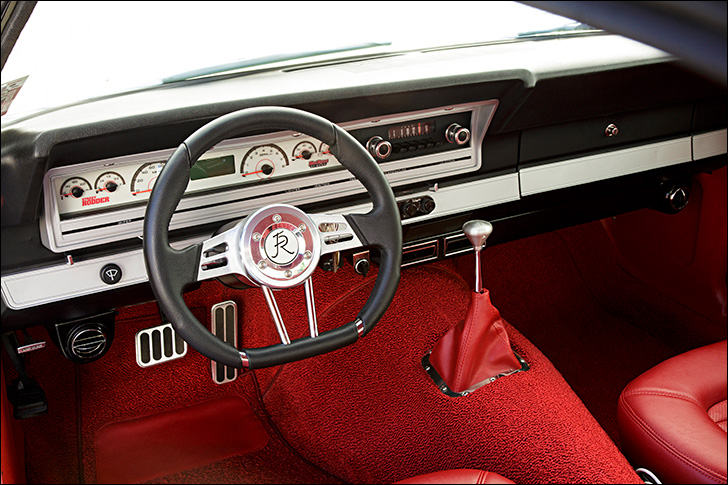 The overall look of the car is best described as mid-century modern. That’s a phrase used in home interior and furniture design, but it can apply to cars as well. The plain steel wheels and subtle paint are a throwback to the first golden age of muscle cars, but the low stance, 18” rubber and all-aluminum, EFI powerplant with overdrive put the Ford squarely in the present. I envision this Fairlane at a cruise night in 1969 (or 2016), just itching for a mouthy Chevy guy to crack wise. The goods in this car are enough to wipe the bowtie right off your face, whether in a straightline or around a turn. Since the Fairlane was buttoned up, it’s been driven across the country and made appearances at multiple shows, including the Street Rod Nationals in Louisville. 10 years ago, if you told your average car guy about a 1966 Fairlane flying the Street Rodder flag at the NSRA Street Rod Nats, they’d have laughed in your face. Let this be a lesson to those of us who are stuck in our ways, doing things because “that’s how we’ve always done it.” 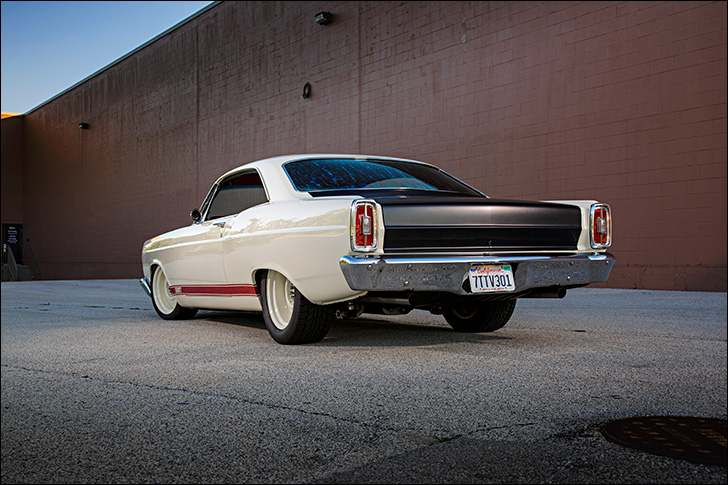