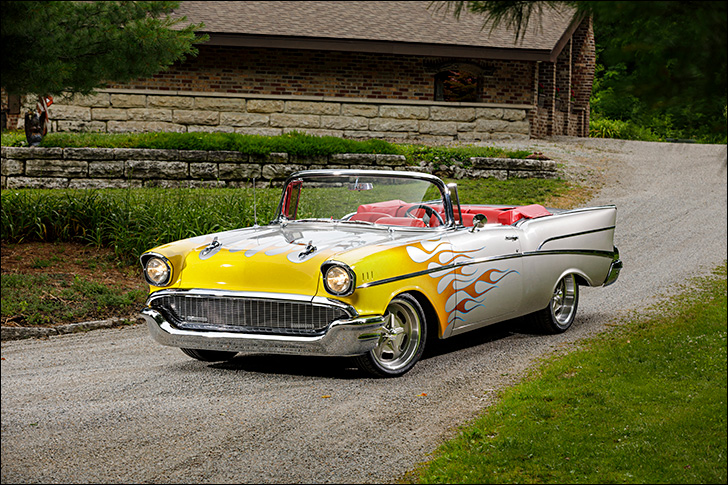 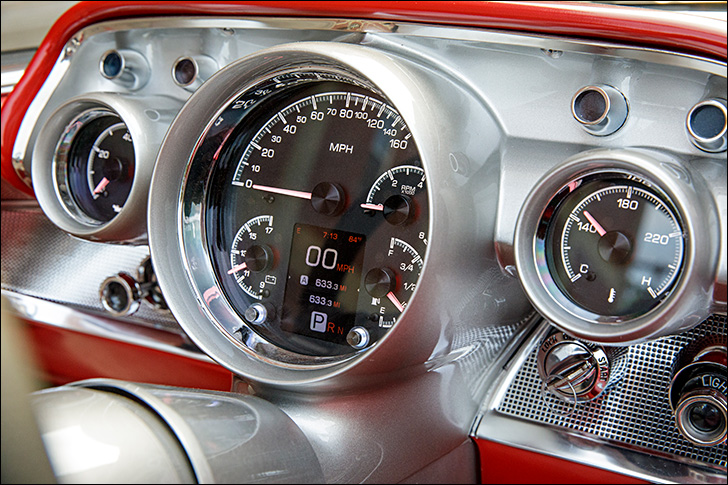 Dinah Shore would be proud

“See the USA in your Chevrolet,” that was Chevy’s motto in the 1950s, encouraging Americans to buy a new Bowtie, buy some gas and go try out Eisenhower’s new interstate system. The war was behind them and the moon was in front of them; there were new frontiers everywhere you looked, and they all seemed so attainable behind a wrap-around windshield.

Fast forward sixty years, and we’re witnessing a resurgence to see the USA again, this time in an old car; the same cars Dinah sang about actually. The 60th anniversary of the ’57 Chevy was not lost on Street Rodder Magazine, so it only made sense that this year’s Road Tour car be a five-seven, fins and all. This car brings up a good question: what makes a ’57 Chevy a ’57 Chevy? Is it the harmony of the individual shapes?  I ask because just 1% of this car is from 1957, or Chevrolet for that matter. The body is made up of stampings licensed by GM, made by Golden Star Classic Auto Parts, and most of the trim was supplied by Danchuk. What looks like a 1957 model is actually more like a 2016, if you want to get technical. 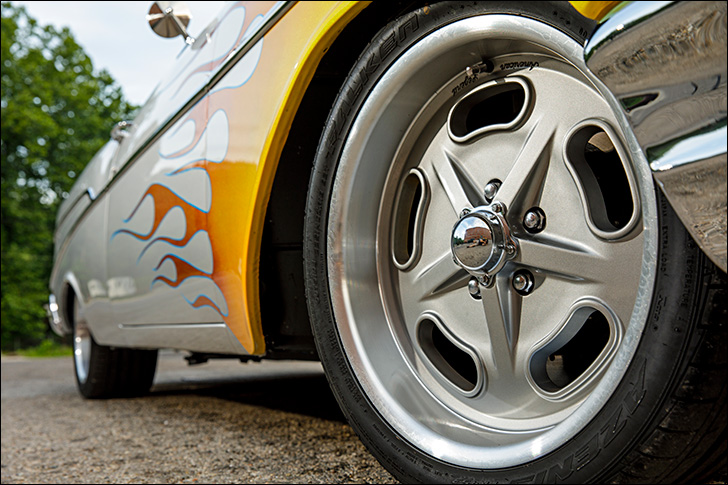 With the body assembled as GM intended, it was time to make the Brockmeyer rendering a reality. First on the list for the Woody’s Hot Rodz team was the stance; low and wide. Roadster Shop slid one of their SPEC chassis under the body, decked out with a Flaming River rack and pinion, Roadster Shop 9-inch and Wilwood brakes. The classic kidney-bean wheels are certainly a throwback to the ‘50s and earlier, though the 18x7 and 18x9 are decidedly modern. Under the hood you’ll find a bit of a throwback as well; motorvation comes from a Chevrolet Performance ZZ6 crate motor. Rated at 405hp, this small block boasts up-to-date features on a classic design. It’s been topped by a FAST EZ-EFI 2.0 system and pumps 400+lb/ft back to a Hughes Performance 4L80E. 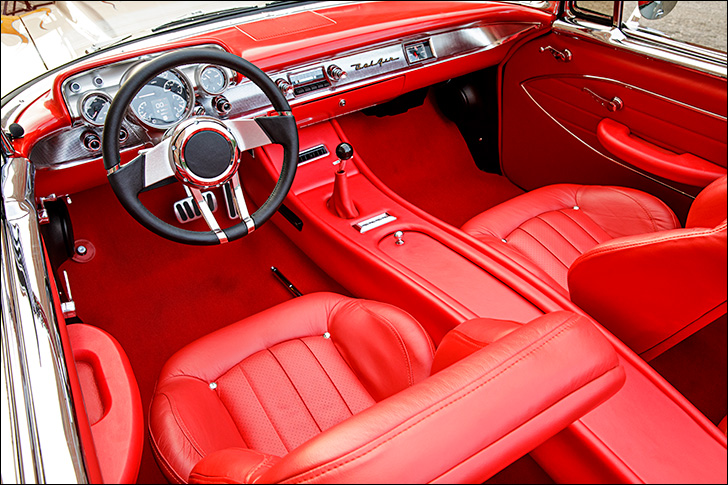 Inside, a high-tech HDX instrument system from yours truly was installed, bringing user-settable color-change LED lighting and a full-color TFT message center to the party. As many modern features as possible were incorporated into the HDX series, including a Bluetooth app and audible warnings! High-tech in a vintage wrapper, it couldn’t fit this car any better. Vintage Air and Custom Autosound also got the nod, and we’re all linked together by an American Autowire harness.  Pete Hagan’s Show Cars Interiors had their work cut out for them, making door panels and the center console from scratch. Procar by Scat ponied up a pair of front buckets, while the rear buckets were custom fabricated to match. Everything, and I mean everything, is bright red, from the leather to the paint to the carpet. 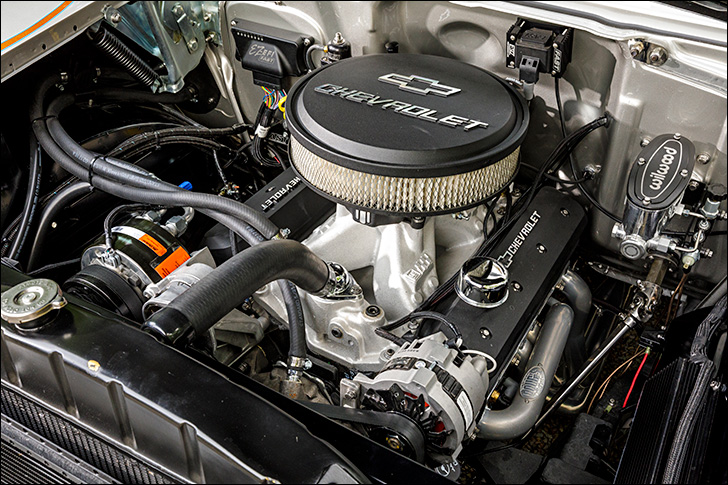 That 1% I alluded to earlier is a bit of brightwork, the interior trim and windshield border. These parts are from a bona fide 1957 Chevy, and got a new lease on life thanks to Sherm’s Custom Plating. The balance of trim was sourced from Danchuk, and was put in place after the empty shell was painted PPG Nickle, and then graced with yellow-to-red flames. 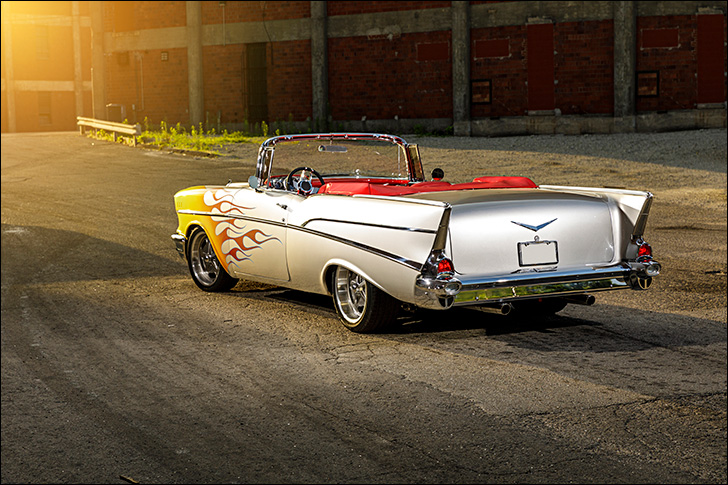 In the end, I think that yes, the visual representation of a vehicle makes one what it “is;” no one will call this anything but a ’57. Equally as important is the aura surrounding it, the feeling you get looking at the car. The Road Tour Chevy gives off the vibe of a cool ‘50s hot rod with a traditional small block, flames and the interior only an old car can have. Like a hip replacement or laser eye surgery, people have simply figured out a way to hang on to the things they love. If that means we can have all-new 1957 Chevys, then sign me up!