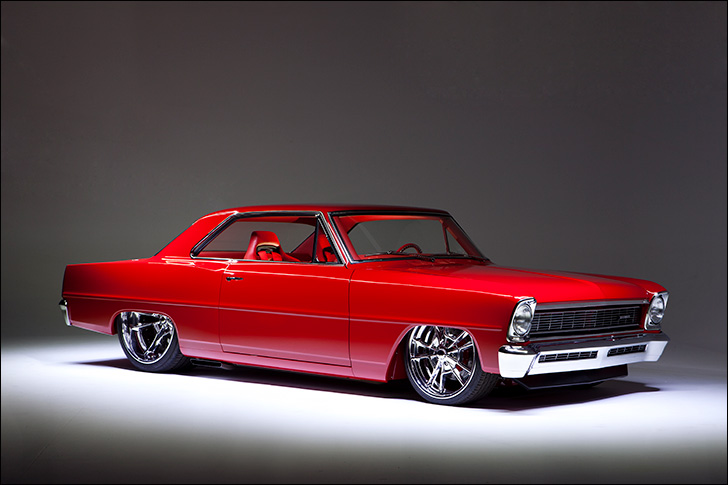 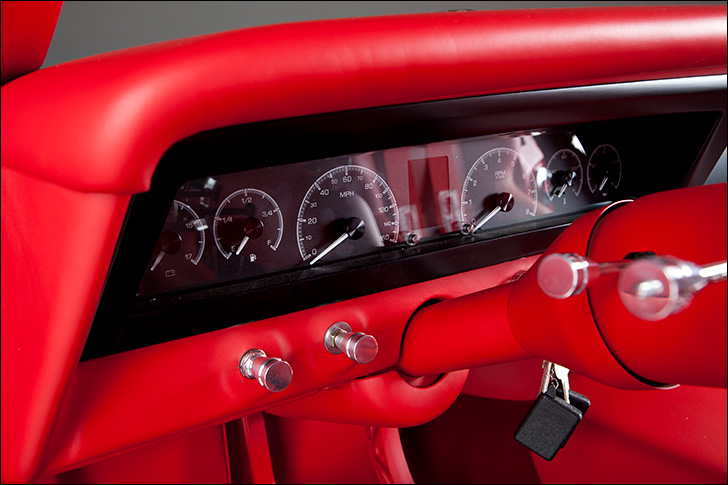 When Chevrolet released the diminutive Chevy II, it was aimed at the budget-conscious buyer who wanted a smart little car to get from A to B without costing big bucks at the pump. Yes even in the 1960s there were those who favored cheap and practical over fun and exciting. Everything about the Chevy II was done on the cheap, from the lame front subframe to the will-get-you-around engine options. As a result, it took some time for the Nova to gain favor in the eyes of the performance enthusiasts. Many Chevy II Novas were driven off the lot by the bookish, reasonable set; we thank them today for buying these cars in such numbers.

Fast forward a few years, and Chevy’s compact has been welcomed into the street freak family, with countless high performance X bodies built each year. Kindig-It Designs over in Salt Lake City found themselves with a ’66 Nova on their roster and the team set out to right all the wrongs GM burdened this car with. All but the confusing Chevy II/Nova naming crisis. 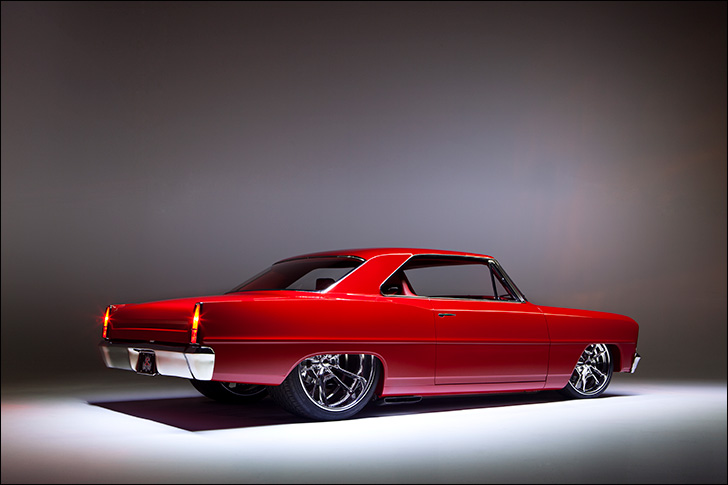 The first item on the to-do list was to ditch the stock suspension. Not only did the car handle like a wet noodle, there simply would not be space under the hood for those shock towers, but more on that later. A custom chassis was built with a more modern independent front suspension and a four-link rear system. The aft section was arranged in such a fashion to accommodate obnoxious 405/25 24 rear tires stretched around Billet Specialties Reaper wheels. The front rollers are no slouch either, ringing up at 225/35 20s. Compared to the 14s this car came with, these sizes are absolutely nuts. Speaking of nuts, Wilwood stepped up with a set of front and rear brakes with six and four piston calipers, respectively. 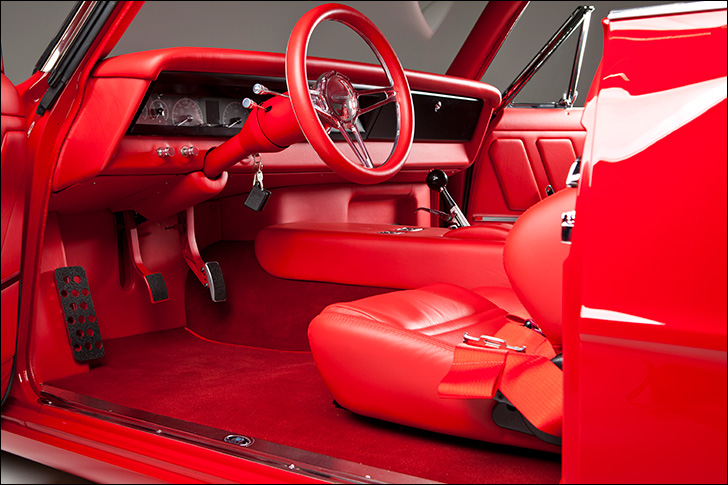 Up top, the stylish Nova sheetmetal was massaged to perfection, but not before the badges were shaved, the rear wheel openings were stretched a crazy six inches, and the rockers extended two inches. Kindig-It flush door handles replace the sticking-out stockers, and the stock bumpers were narrowed n’ tucked. All of the shiny stuff was rechromed by Ogden Chrome, and what wasn’t got a healthy huff of Mercedes Hibiscus Red paint.

Inside the hardtop shell is a very red office from JS Custom Interior. You’ll see a lot of Can Can Red leather covering everything from the custom center console to the modified Corbeau Sport seats to the rear seat delete panel. Whatever wasn’t stitched up was painted black or a matte version of the Hibiscus paint on the outside. An ididit steering column topped by a Billet Specialties Fury half-wrap wheel steers the ship while the driver tiptoes on custom built pedals. Stuffed into the stock-appearing dash is an HDX-66C-NOV instrument system from yours truly. The HDX series is pretty wild in that you can change the lighting color to match your paint, or mood for that matter. Over 30 colors are available for the user to mix and match to their heart’s content. HDX also boasts a large TFT message center for high-tech data displays to keep the driver informed. 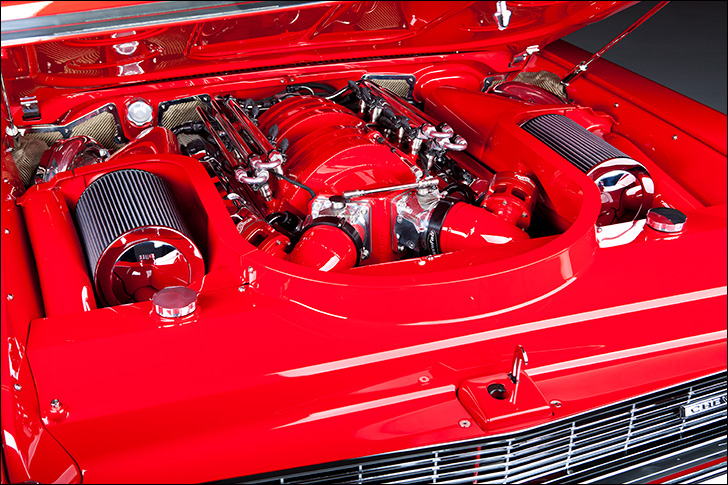 Informed is a good start, along with alert, quick reflexes and nerves of steel. These are attributes the driver of this car should have, considering the hammer under the hood. Nelson Racing Engines was tapped to put together a bullet for the Nova, and if you’re familiar with their name, you know the shop can build serious power. While the stance and exterior of the car is set on ‘stun’, Dave Kindig told Nelson the Nova’s engine should be set on ‘kill’. Based on a big block Chevy, the final measurement is 638 cubic inches of anger. Because too much is not enough, a couple of turbos were plumbed to the dual throttle bodies on a custom intake manifold. Now you know why the shock towers had to go. Details are on a need to know basis but we did learn that the Deuce put down north of 2,000 hp to those 405s. An ATI Powerglide is bolted to the backside, while fumes are vented through a custom stainless exhaust system. To support the monster engine, there’s a second radiator hidden from sight, along with a pair of trans coolers, and there are two fuel systems.

It’s safe to say that every square inch of this Nova has been changed, proving the Chevy II is a good starting point for a hot rod once you take out all the boring. Chevy eventually stepped up and offered some high performance option boxes for the Chevy II Nova order form, but the vast majority still went out the door with the base engine, destined for a life of moderation. Kindig-It Designs is not known for moderation, and this ’66 is proof.