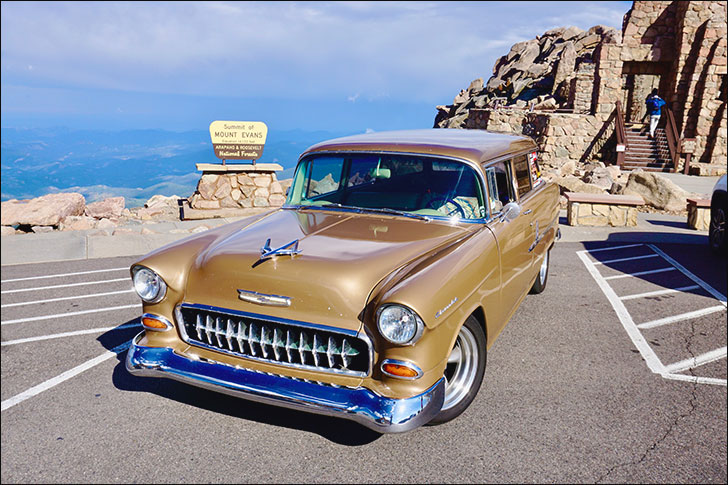 Many of you may remember the jingle “See the U.S.A. In Your Chevrolet” made popular by Dinah Shore and later Pat Boone.  That song became the theme for GM for many years in a variety of commercials and TV shows.  And as you begin to read this article, it’s probably playing in the back of your head now, your welcome.

About 10 years ago, Jeff Thisted was on a mission for a classic car for his daily driver.  Now Jeff has a colorful resume, coming up in southern California he spent some time as a teen on the show “Saved by the Bell”, later as a Production Coordinator on “The Price is Right”, a judge on “Wrench Wars”, appearances on “Rods N’ Wheels”, emcee for awards shows, and the track announcer for many of the Good-Guys Autocross races across the country, just to name a few.  To say he gets around is an understatement, but he does it in style. 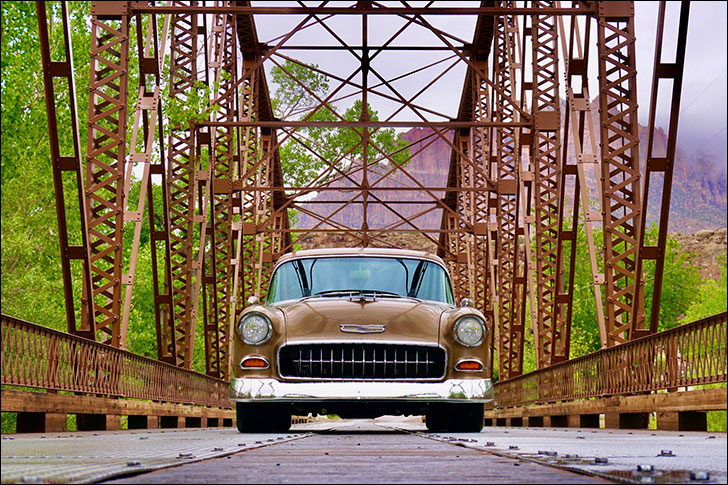 While scouring eBay awhile back, he found a brown 55 Chevy 210 Handyman wagon in upstate New York.  Ironically enough, it was carrying the old blue and yellow California license plates still.  While planning a guy’s water-skiing trip over the weekend, Jeff made it perfectly clear that he had to be on the dock to finalize his bid since that was the only place you could get cell reception at the time.  Life’s real tough, water skiing and buying 55 Chevy’s.

Most everyone has heard of “Nomads” which Chevrolet initially offered as a wagon option from 1955-57.  There are some distinct differences between the tri-five wagon vs the tri-five nomad and it’s common to the untrained eye to confuse them.  The most obvious one to me is the “B” pillar at the back edge of the front door, Nomads have a forward leaning pillar, wagons have a vertical one.  When all else fails, Google it! 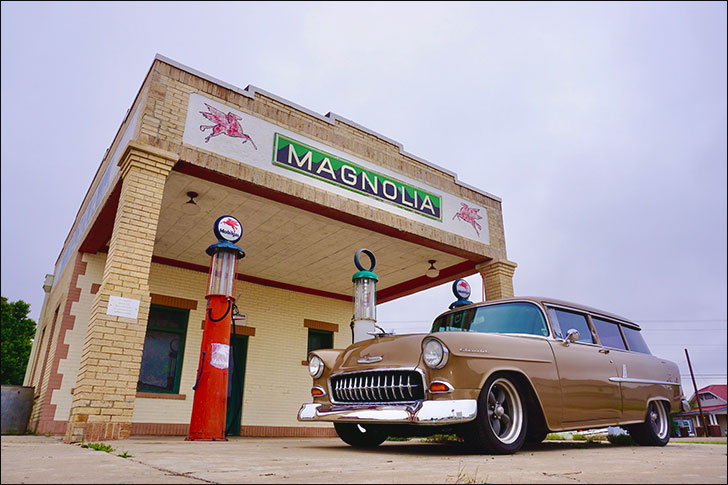 Jeff made it to the boat dock that day 10 years ago and won the bid on eBay for his new 55 Handyman Wagon.  Transportation was arranged and the California plated wagon found it’s way back to the west coast.  The blue and yellow California plates from the eBay ad however, found their way into someone’s garage.  That tiny bit of nostalgia was stolen along the way apparently.

A lengthy list of upgrades has happened since Jeff purchased the car.  Holley fuel injection, 4L60E transmission, Vintage Air A/C, Dakota Digital RTX gauges, headers, 9” rear end, big brakes and numerous others.  But the real “cool” factor in this car is the fact he drives it everywhere!  It’s been coast to coast and border to border.  Recently it made it to the top of Mt. Evans which is the highest elevation for a paved road in the country, 14,265 feet in case you’re wondering.  It’s covered almost every mile of the original Route 66 and Jeff has somehow managed to find almost every old gas station and motel in the country from the 50’s and 60’s.  Check out idrivea55.com to see his adventures.  And should you ever see him or the car at a show, just remember, it’s NOT A NOMAD!