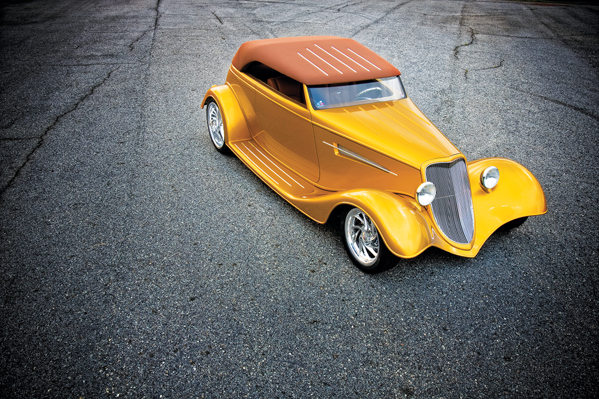 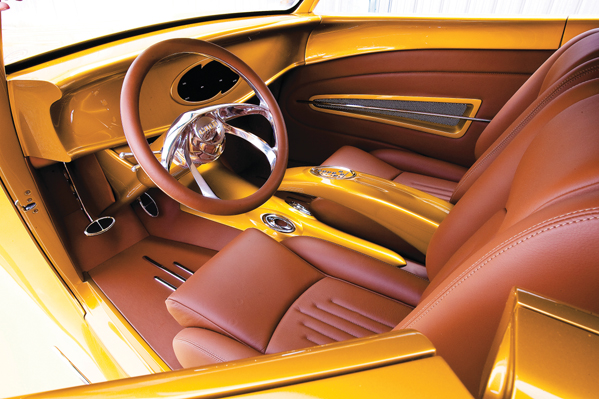 “Different strokes for different folks” they say; nowhere does that maxim hold truer than the hot rod world. People build cars for any reason you can imagine. Race cars (under that heading alone there are a hundred different avenues to explore), street cars, show cars, car builds for therapy, status symbols. Some people build cars as a creative outlet, other cars are built to make money. And then there are the cars that are built for the sole purpose of shutting everyone else down, to have the baddest car in the land. There are some that will claim “winning isn’t everything;” to which others ask, “Then why play the game?”

Tammy Ray is no stranger to high-end show cars and the level of fit and finish required to compete on the national show-circuit. A previous inductee to the Pirelli Great 8 (a top honor already) with her ’33 SpeedStar coupe, Tammy was hooked. The Ridler had to be hers. A little background, the Ridler award is regarded as the highest honor a show car can receive. It is handed out at the Detroit Autorama each year to honor the best car. The award’s namesake, Don Ridler, was known for his creativity, so the award is aimed toward builders that express the highest level of build quality along with a healthy dose of creativity combined to make a beautiful vehicle.

Contrary to the old adage, ‘less is more,’ more is more when you’re gunning for the top award on the planet. A quick shave and a hair cut just won’t cut it in Detroit; Tammy and T&T Customs spent a solid three years massaging Gold Digger. At first, the car’s name might seem a crass play-on-words, however, Ray owns a gold mine, quite literally; she holds the keys to Crisson Gold Mine in northern Georgia. Ridler cars are littered with hand-built, one-off parts and more attention to detail than seems possible. No bolt untouched, no surfaced goes unpolished, chromed or painted.
Ted Thomas of T&T Customs in Canton, Georgia took an Alloway chassis and hung a Winters independent quick-change rearend with Wilwood brakes and Aldan coilovers to round out the aft-section. Up front, Mrs. Ray rides on a Heidt’s IFS setup with matching Aldan coilovers and Wilwood binders. The wheels on Gold Digger are like none other. Designed by Mike Curtis to mimic the drill bit used in a gold mine, Foose Wheels carved the 16” and 20” double sided rollers, which are just as detailed on the inside as they are on the outside.

Tammy Ray’s rolling work of art features an LS2 Chevy dressed to the nines with a TH350 transmission to match. As you can imagine, most of the bits under the hood are handmade, such as the brass radiator, headers, exhaust system, valve covers (each one featuring a one-ounce gold nugget!) as well as the unique intake tract. Featuring a custom intake manifold with a fuel injection system from Extrudabody, the painted runners with chrome plated tips with mesh inside really create a different look. The air-intake tubes were fashioned to resemble an exotic, long-runner injection system from days gone by. Meziere supplied the electric water pump.

Gold Digger’s interior is nothing short of beautiful. It’s an elegant, classy combination of leather, polished, painted and chrome pieces that flow together to make a cocoon more inviting than my living room (or most living rooms for that matter). Notice that there is no shifter; take a close look at the waterfall console; it holds a Retrotek push-button shifter. Think ‘push-button Torqueflight meets the 21st century.’ In the center of the Garolite dash (a type of plastic from the aerospace industry), sits a custom Dakota Digital instrument system based on the popular VFD3-1012. Aiming beyond the Great 8 calls for special favors; Ted and Tammy specified a trick modification to the housing of the gauge system that takes a style cue from our MCV-7100 motorcycle instrument with a ‘spike’ on the top and bottom. To match the gorgeous, custom-mixed gold PPG paint, we whipped up a special amber-colored display color for Tammy’s special instrument system.

It appears Tammy has been bitten by the car show bug in a big, big way. Her first custom car made it to the Great 8, and the second show car captured the top award in the country. One can only wonder what her next build will look like, considering she already owns the gold standard. 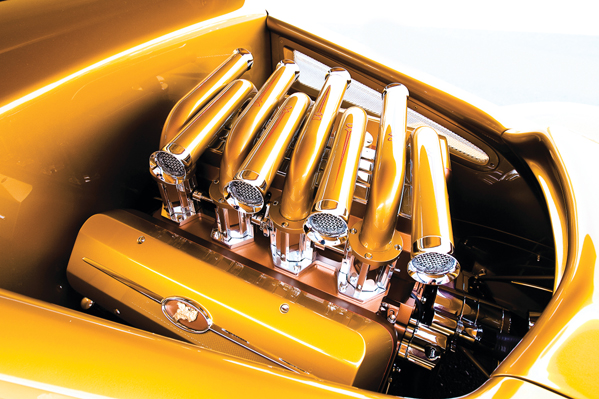 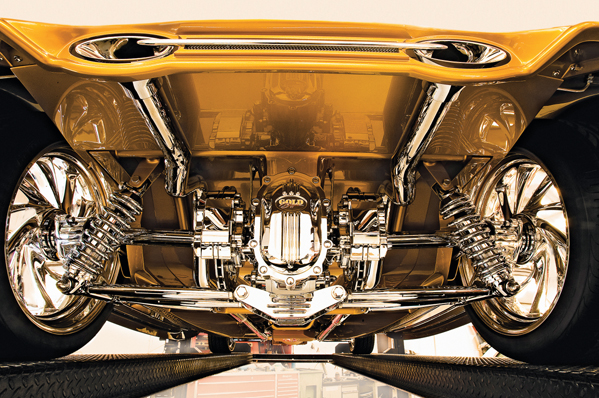 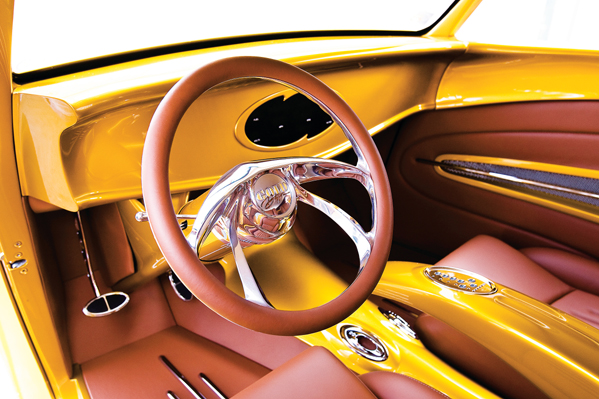 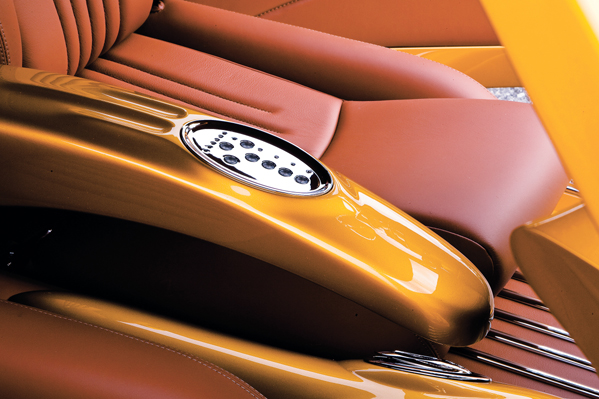 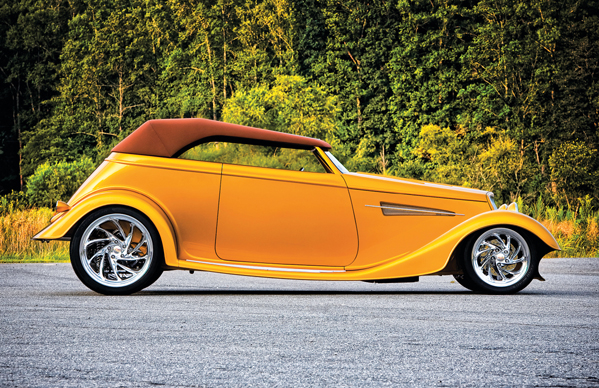 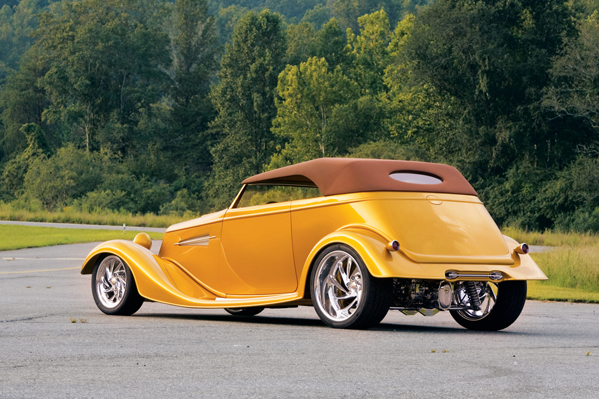 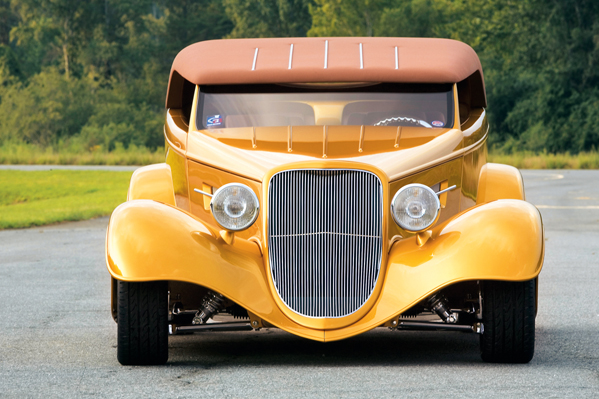 To see the original article along with the rest of The Motor Market magazine, click here!