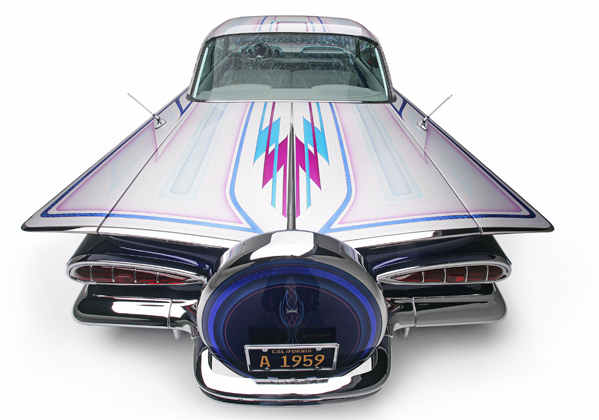 Soap box time. The full-size ’59 Chevy’s are perhaps the most beautiful cars to come out of Detroit. Mild customs, full customs, lowriders, modern or traditional, the ’59 Imp is a car you can’t mess up. For the past nine months, we’ve brought you the slickest customs we could find, nearly all of them having a modern-theme to them, rolling on big-inch billets. In the name of spring time and new beginnings, we bring you a legit, So Cal lowrider, complete with 13x7 Daytons, pearls, candies and eight batteries.

Being the Five-9 Chevy is such a sought after piece, Agostino Onorato had a hard time finding a suitable starting point for his dream ride; everything he found was too expensive or too rough. Agostino stumbled upon an ex-Lowrider Magazine feature car, and jumped at the opportunity to buy it. Not content with the previous owner’s tastes, the ’59 was torn down and done just as Agostino envisioned it. Shaved mirrors and handles, a continental kit and fresh skirts rounded out the body work, as this was a clean California survivor before it went under the knife. Steve Deman in Chino, CA sprayed the mile-deep Candy Cobalt Blue, along with the pearl white on the roof, fins and deck lid. The graphics and pinstriping were also accomplished by Steve. The end result is true to lowrider tradition, but not over powering.

To move the sleek Chev, a solid 383 was assembled with a Street and Performance dress up kit, and all else under the hood was hosed with chrome. The beefy Matson radiator is fully polished and adorned with a chrome fan from Spal. No custom build is complete without the burble, growl, roar, (choose your own exhaust adjective) from the exhaust, so a set of Magnaflow twice-pipes was hung under the Impala.
By now the ’59 was lookin’ fine, but Agostino knew it needed a killer system to live up to its look. Two systems actually, the first being a custom-built hydraulic system from Homies Hydraulics in Paramount, CA. Featuring a custom pump and lines, the whole setup is controlled through three-square dumps and powered by eight batteries. The second system the car needed was a sound system; a pair of 10-inch W7 JL Audio subwoofers, with Alpine amps and midrange speakers.

The final piece of the puzzle was the interior; with a molded, shaved and painted dash, the unmistakable gauge housings were frenched, chromed, and stuffed with the direct-fit digital instrument system from Dakota Digital. With hard parts like this, the upholstery needed to be done right, so Agostino took the ‘9 to Henry’s Customs in Azusa, CA. White leather on the seats and the custom, sweeping door panels give the inside of this ’59 a look that is second to none. Those door panels start at the kick panel and sweep in one beautiful, flowing motion all the way back to the rear seat.

Agostino is happy as a lark with the way his Impala turned out, and rightfully so. This rig is one of the slickest, most tasteful lowriders this author has seen, and, the man really couldn’t have picked a better canvas for his vision. 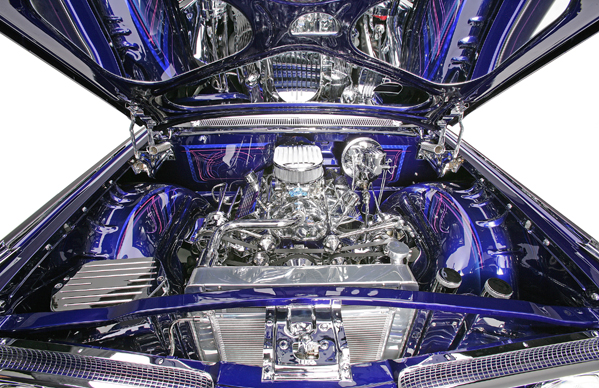 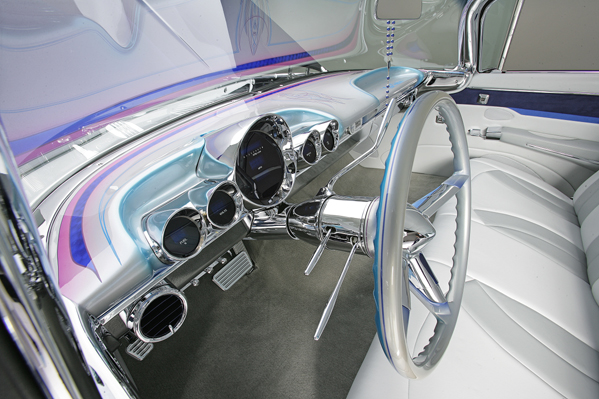 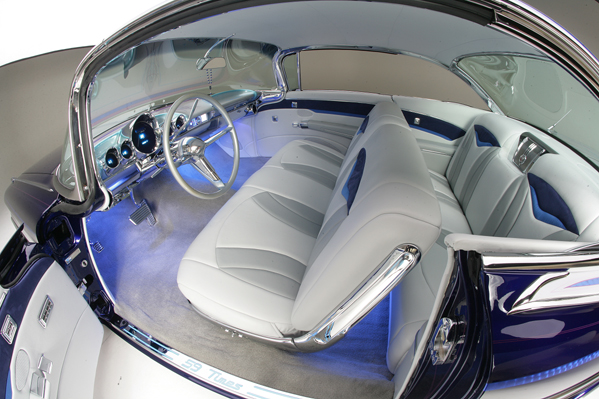 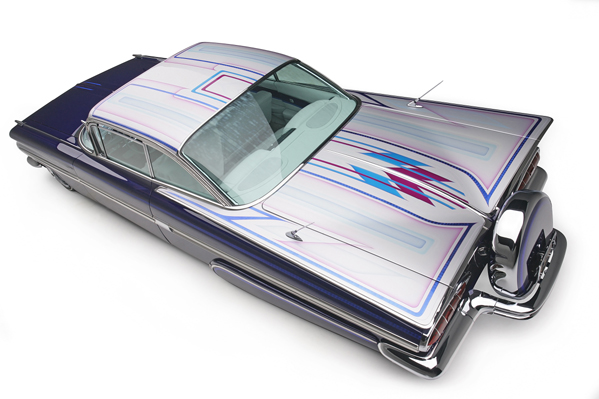