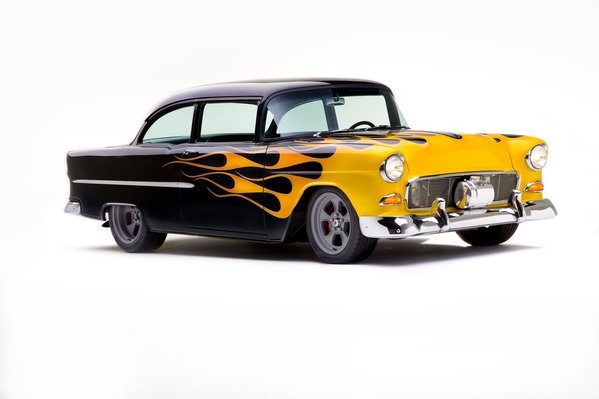 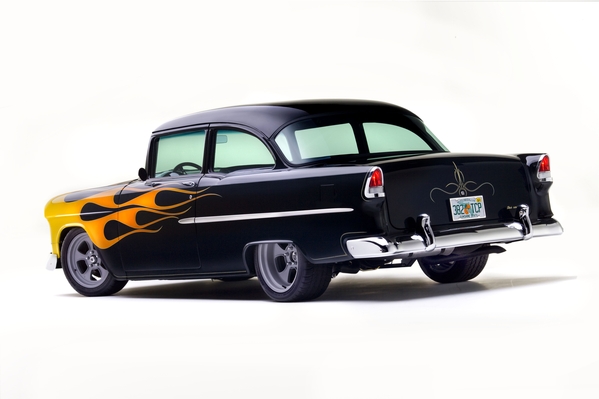 Every year for the past 15, Street Rodder Magazine (SRM) builds a hot rod of some sort, no two the same, and drives it across the country. Sounds like a pretty sweet gig, huh? For 2011, the crew wanted to pay homage to SRM founder Tom McMullen’s trademark ’32 roadsters as well as create a bigger, more comfortable cruiser, so a ’55 Chevy 2-door post was chosen for a starting point.

Starting with a clean 210, the body was draped over a brand new Art Morrison Engineering (AME) chassis complete with AME’s own IFS setup, Flaming River power rack, and Strange center section stuffed into the AME nine-inch housing (52-inches wide). The whole works rolls on a set of 17 and 18-inch Wheel Vintiques billet Cruisers framed by a quartet of BFG rubbers. Before you throw out the BS flag because this 210 is clearly missing some bright work, let me explain that Sondles of Woody’s Hot Rods (builders of the car) is pro-choice when it comes to trim. He’s fine if it all gets deleted, and as a result, the ’55 is devoid of most 210-specific pieces, and the car wound up looking like a 150.

With a chassis like that, and flames, this car had better scoot. Instead of another LS or mouse motor, from the history books, a nasty 409-based 474 with aluminum heads pushing over 550hp and 575lb-ft of torque was poked between the rails. Topped off with a FAST EZ EFI induction system and tied to a GearStar 2004R Level 3 transmission, the beastly W-motor is a peach to cruise in, with more than enough grunt to keep the euro-trash in line.

Since the Road Tour cars get driven long distances, the interiors are always top notch and well optioned. The ’55 is no exception, sporting a Wise Guys bench wrapped in Luxor-soft vinyl. If you haven’t seen this stuff, it’s cool! Luxor-soft is a high-end vinyl that looks like leather. In addition to the slick threads, the seat features a split back to allow access to the backseat, and upfront there are multiple power ports for charging all of today’s electronic doo-dads. A three-spoke steering wheel and a big ol’ 8-ball atop a long, lanky shifter give the office a touch of old-school cool. Bringing the interior in to the modern age is an Alpine deck from Spade Kreations, capable of swallowing CD’s, playing AM/FM radio, as well as allowing you to plug in your MP3 player or iSomething. Lest you think this technological marvel is ruining the vintage feel inside, the deck is hidden behind a brand new glove box door. It’ll be our secret. Also boasting a modern look without ruining the vibe, is a Dakota Digital VHX-55C-S-B instrument system; six fully electronic gauges (to start), lit needles, and a lifetime warranty, all packed into the stock gauge opening makes those under-dash parts-store gauges you always ran your knee into look like the powder blue tux you wore to Prom. We’ve come a long way.

As I mentioned, the Road Tour car was built to be driven, but, is that world-class AME chassis really necessary for cruising? In a word, no. However, it is necessary for putting down skidpad numbers on par with a C5 Vette, and posting slalom times faster than a 2010 Camaro and 2011 Mustang. The car has already cris-crossed the country, hitting shows like the NSRA Nats in Louisville and the Car Craft Summer Nats in St. Paul. Tom would be proud. 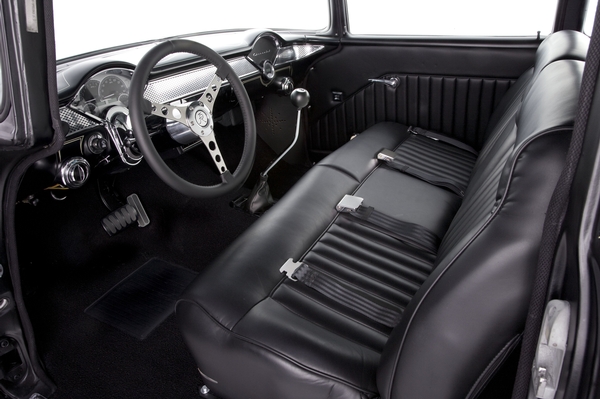 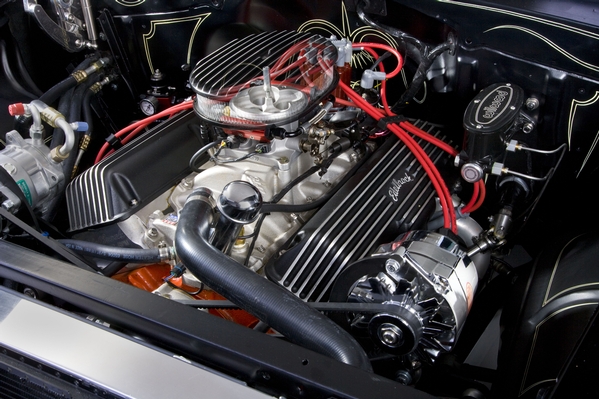 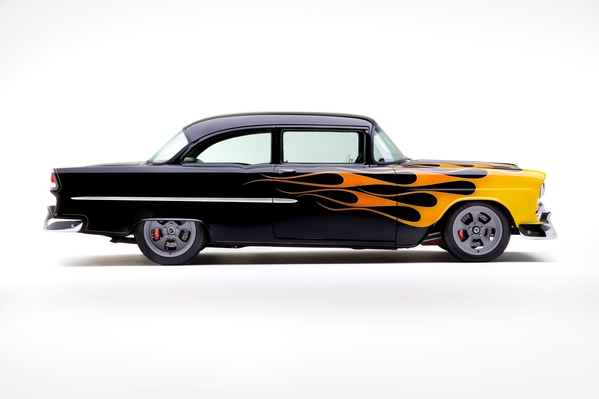